What began as a DVD extra has grown to a full feature-length fan film...

Andrew Modeen has always been a Highlander fan and was a prominent member of the Highlander Bulletin Board forum. But when the opportunity came to create some new material as part of an official contest, he had no idea that his project would take on a life of its own and become one of the few fan projects endorsed by Davis-Panzer.

Here he tells HLWW how his ‘Dark‘ stories saw the light… 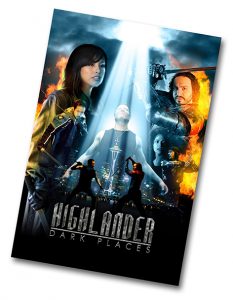 There’s a lot of television to inspire and entertain, so why try your hand at producing something for Highlander rather than another premise?

I’ve always been a big part of the Highlander fandom since I was practically a kid. Writing fan-fiction for the Highlander bulletin board, Shockwave Flash stuff, even dabbling into mild green-screen work with the Connor & Duncan Show on YouTube. When the opportunity arose with the second season of the Highlander TV series was about to hit blu-Ray (“Create a Watcher Documentary”) I jumped at it. If you track down a copy of the blu-Rays for season 2 (they’re pretty rare nowadays), you can still find mine on there.

You’ve explained this at conventions, but talk us through how it went from a mere idea to something viable and to which Davis-Panzer actually gave you permissions…

Jeremy Orr led the charge with his extended deal to then go on to produce more content for Davis beyond his Watcher documentary (“The Watcher” serialized), and I approached with my own material. The idea, at the time, was “Highlander: Dark Places” would go on Season 4, “Highlander: Dark Reckoning” would go on season 5, and both “Highlander: Dark Endings” and “Highlander: Dark Beginnings” would go on season 6. The bonus disc, that kind of thing. Then Davis discontinued the blu-rays with season 3 and that kind of went out the window. A new deal was reached wherein Jeremy would combine his shorts into a full (of course, shooting new connective material to round it out), and myself the same. Terms for reasonable means of distribution, screening were all no problems at all. And… then a bunch of years passed and people probably figured the whole thing for dead. Not so. The fourth chapter is pretty much entirely a flashback in 15th century Romania… and almost all of it is green-screen. While the best precautions we could muster were done, ultimately when you have guys walking around in full platemail armor… that’s pretty hard to green-screen out. You get holes. It took a long time (years, literally) to get all of that rotoscope and compositing work done, and I owe it all to Robert Violette and Jeremy Orr.

All conversations with Davis’ representatives were and are super friendly and helpful. They are super supportive of the fan community.

On location for ‘Highlander: Dark Places’

Filming a production of any kind is a lot more difficult than ‘just’ writing fan-fiction (and that alone can be a skill as well), so what were the first challenges you had to deal with?

Originally, “OK, what kind of quality Highlander film can I shoot with virtually no budget in Seattle and have it not be terrible?” Luckily, I was quickly introduced to some folks involved in the local Seattle filmmaking community, including my director of photography, Benito Vasquez, who has been there from the start and has seen this thing through to the bitter end. Resources were aggregated, talent was found (and some amazing talent! Some of Seattle’s finest, even folks coming up from Portland… George, of course, our Vlad, even flew in several times to complete his part), and we just kept chipping away at it.

Later? “How the hell do I combine all of this stuff together that was never intended to be a full feature into… a full feature?” When you watch the film you may notice the compressed nature of the narrative. A lot is going on, and pretty quickly. New connective narrative material was shot to spread throughout to really bring it all together. Of course, had I known from Day 1, “You’re doing a full feature, not 4 shorts,” the resulting movie would be a very different one.

As you say, this started out as a ‘short’ which is now definitely a lot longer than originally planned. How much of the finished result was in your mind at the start?

Pretty much all of it. Obviously it was intended as four 20-ish minute shorts… the fourth one, though, quite a bit longer (we really wanted to cover all the major milestones in the real, historical Vlad Dracula’s life… altered to suit Highlander, of course). So it’s all there, just rearranged in ways that may not have been intended at its inception, to create the full feature.

The film’s first chapter we meet Malej, Willem, Justina, and Vlad/Keradoc. Each one of those characters gets a chapter to shine and I wanted to bring it full circle at the end. At heart, though, the movie is a statement about the ultimate futility of the Game. Even if you were to win it… are you really winning?

In the nicest way, you can see the confidence and skills growing as you watch earlier and then later footage – are there any things you’d do differently now?

Quite a few things, but I should probably keep those largely under my hat. There were a few factors beyond my control, but in a project with so many moving parts that’s probably going to happen. But again, had I to do the movie again, knowing it would be a full feature from inception, it would be a whole different beast. There is a lot of dialogue in the film, as it was going to be a lot of information to cram into the four shorts. So it may come off, at times, as… a little talky. To do it over, the four shorts structure out the window? It wouldn’t be that. Not at all.

What’s the reception been like when you’ve shown clips etc. to people?

The consensus that I’ve seen is that people seem to connect with George’s performance as Vlad/Keradoc. He kind of chews the scenery when he’s on camera, and folks seem to dig that. The way I envisioned the character was kind of… you know, your average 80s, 90s action movie Eurotrash villain, going up against a very no-nonsense, prototypical sort of heroic protagonist who’s just having none of that.

Fans also seem to appreciate the ethnic diversity of the cast. 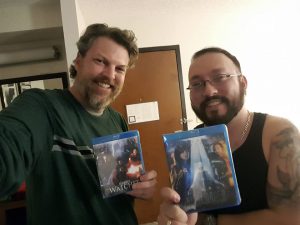 Jeremy Orr and Andrew Modeen – with their finished works…

And, obviously, a final question…how can people buy the final DVD?

We did one very small batch of blu-rays prior to the Highlander convention this past December. At present, we are taking pre-orders for another small batch of blu-rays directly on www.facebook.com/highlanderdarkplaces . Shortly thereafter you can find Highlander: Dark Places directly on Amazon or Createspace on DVD. Just search for Highlander Dark Places. We’ll probably let that simmer a bit, then open it up to streaming on demand on Vimeo. Keep your eyes peeled on the Facebook for future updates. Also, we may have a little surprise we can talk about in a short while.