There can be only one, but there have been various attempts to launch 'Highlander' into the comics-format. IDW's new release looks promising...

Rachel Ellenstein is busy tending the antique store owned by Russell Nash when she receives a visitor. Both she and the newcomer know that Nash is really an Immortal named Connor MacLeod – and they both know that identity attracts the kind of trouble that leads to the drawing of swords and the seizing of Quickenings. But Osta Vazilek says he is not there to fight, simply to talk and asks Rachel to pass on a message for Connor to meet him.

MacLeod accepts the request, wary but aware of the history the two men share and how Vazilek once saved his life. It was 1863, shortly after the fateful battle of Gettysburg and Connor stumbled onto the church and holy ground where Vazilek made his home. But MacLeod is being pursued by another Immortal who has less concerns about the rules of the game…

For a mythology so rich in potential it’s perhaps surprising that Highlander has had something a spotty history in comic-book form.  There was a promotional comic-strip issued for the film’s original 1986 release and more recently Dynamite Entertainment took a stab, slice and thrust at the franchise with the likes of  Brandon Jerwa (no stranger to multimedia tie-ins) at the helm. Last year a company Emerald Star attempted to kickstart interest again, but a poor distribution model and largely savaged standards of artwork essentially saw that project stillborn.

IDW is likely a good home for the title. Over the years they’ve become the home of other franchise tie-ins as diverse as Star Trek and Teenage Mutant Ninja Turtles, Transformers and My Little Pony and there’s a certain art to finding the key appeal to each property and mining that seam successfully.

Brian Ruckley is an established author, helpfully and with good foresight born in Scotland and penned the fantasy novels that make up the Godless World trilogy –  and had previously worked on a Rogue Trooper title for IDW so there’s no denying his credentials. The story, set just before the events of the first film, shows that Ruckley already gets the Highlander vibe – this opening salvo mixing the modern with the historical and showing how one informs the other. It reintroduces us to Rachel (played by Sheila Gish in both the original film and Endgame) but also gives us new characters that fit loosely into the general mythology of Immortals through the ages… 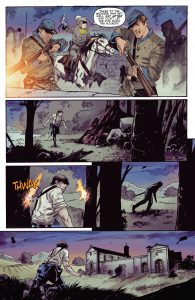 The artwork is interesting. Though there’s a danger of damning with faint praise, Andrea Mutti’s illustration is a vast improvement on the Emerald Star efforts and provides a nice flow to proceedings. It might have been nice to play with the various, clever transition effects that the film and the series became known for rather than the more generic caption which tells us we’re looking at a flashback here, but it’s early days and  there’s hope for the future.

There are several variant covers including the main one, originally a Mondo poster by Francesco Francavilla and also a stylish rendering of Connor by Claudia Gironi (as seen above). Yes, there will be those die-hard fans who notice some inconsistencies and design tweaks that could have been rectified, Connor’s sword etc,  but there’s nothing that will offend or hurt the eyes of a more casual fan of the franchise.

The inherent problems of Highlander comics in previous incarnations is that the first film is immensely popular but the sequels are not… the six season television series often being cited as keeping the franchise alive. Connor is a strong and interesting character, but it’s the likes of ‘same clan / different vintage‘ Duncan and characters such as Joe, Methos and Amanda who expanded the canvas and time-frame and whom fans would also like to see… thus, how does a comic pivot to all those demands and work them into a consistent tapestry (when even the screen versions don’t exactly marry up themselves)? Ruckley’s decision to create a story  with its ‘modern’ element set prior to the original film helps side-step the issue in the short-term but it will be interesting to see which path IDW follows in the longer term if the title is successful.

THIS JUST IN: THE VERY LATEST NEWS…